Working in the style of the Katsukawa school, Shunshō became famous for his portraits of Kabuki actors in the Meiwa era (1764-1772), most of them in this narrow hosoban format. The plight of the monk Shunkan, exiled in 1177 to the island of Kikaigajima, inspired a nō play by Zeami (1364-1443) and many more elaborate later versions for Bunraku (puppet theatre) and the Kabuki stage.

This print shows the moment when Shunkan, trying to conceal his identity from the midwife Oyasu, grasps hold of her metal hand-mirrors, but is overcome as he catches sight of his aged features in the mirror and shares the story of his lonely exile. Sydney Cockerell purchased this and five other Japanese prints within his first few months at the Fitzwilliam Museum.

Since the 1890s he had admired the Japanese prints and drawings in Ricketts and Shannon’s collection, and the elements of Japonaiserie in the elegant interiors of country houses. M.R. James had acquired several Japanese prints in line with contemporary tastes informed by the Aesthetic Movement, but it was Cockerell who laid the foundations of the Museum’s large and diverse collection. 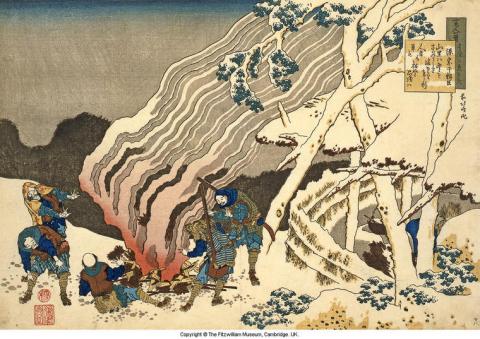 Hokusai entered the studio of Shunshō in 1778 and designed a number of actor prints in the Katsukawa style before establishing his own name. He worked in an extraordinary range of subjects although he is best known for the series of ōban (full-sheet) format landscape views that he started to design in the 1820s.

This is no. 28 in Hokusai’s last series of prints, One hundred poems by one hundred poets as explained by a nurse. The poems come from a popular anthology compiled in 1235. The figures by the fire, probably hunters, illustrate a poem by Minamoto no Muneyuki (d. 939), a grandson of emperor Kōkō:

This print was part of the celebrated Punnett collection of 161 prints and 26 books, which Thomas Henry Riches acquired for the Museum in 1913 at Cockerell’s request. Landscape prints by Hiroshige and Hokusai became one of the main strengths of the Fitzwilliam’s collection of Japanese prints.

Kunisada was the pre-eminent member of the Utagawa school in the middle of the nineteenth century and the leading designer of prints depicting actors from the Kabuki stage. This print was issued to commemorate the performance of the play Sugawara and the secrets of calligraphy at the Kawarazaki theatre in Edo (now Tokyo) in the ninth month of 1832. Danjōrō VII was the most famous actor of his time and one of his greatest roles was that of Sugawara, also known as Kan Shōjō. The print conflates a duel scene with the transformation of Kan Shōjō into the Thunder God.

It is an exquisite example of Surimono (‘printed object’), prints of particularly fine quality, which employed thick, expensive paper and special printing effects, and were issued privately in limited numbers. Surimono were commissioned either by individuals as New Year cards, invitations, announcements and commemorations of special events or by poets who specialised in kyoka (humorous 31-syllable verse) and exchanged the prints at their poetry group meetings. The Fitzwilliam Museum has one of the world’s great collections of Surimono due to the extensive donation of Evelyn Barron in 1937.