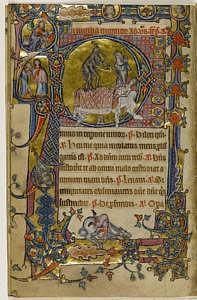 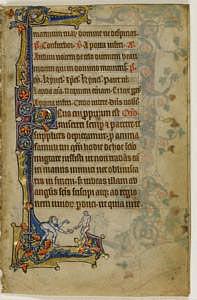 Completely unknown until it re-surfaced in the Library of the Earl of Macclesfield at Shirburn Castle, Oxfordshire, this manuscript became a celebrity as it went under the hammer at Sotheby’s auction rooms in June 2004 and was stopped from export by the Arts Minister. The Fitzwilliam purchased it after a major fundraising campaign to which the Museum’s Friends made the largest contribution in their history. Broken in two before its arrival, the Macclesfield Psalter was conserved and rebound by Robert Proctor with generous support from Colin and Edith Colston. (Conserving the Macclesfield Psalter)

Commissioned for a young man, with input from his Dominican confessor, the Macclesfield Psalter was made in the 1330s probably in Norwich, the foremost economic and artistic centre in East Anglia. It demonstrates the strong connections between manuscript illumination and contemporary monumental painting, notably the best-preserved English medieval panel, the Thornham Parva Retable made in the 1330s for the Dominican priory at Thetford or Norwich. The psalter is a key witness of revolutionary developments in painting: the three-dimensional illusion of volume and texture, the anatomically precise rendering of the human body, and the virtuoso depiction of emotions. It reveals the vigorous exchange between local traditions, metropolitan fashions and continental trends in fourteenth-century England.

Apart from the 150 Psalms, the other major text in the manuscript is the Office of the Dead. Its opening image, one of the most striking and innovative in the psalter, is among the earliest depictions, together with the Campo Santo cycle in Pisa, of the personification of death in action. The marginalia offer moralizations on the memento mori theme. The man falling off his horse is a standard allegory of pride. The nude boy urinating into a bowl is a stock motif in classical sarcophagi, the most numerous objects to survive from antiquity into the Middle Ages.

The Macclesfield Psalter is a newly discovered masterpiece of the East Anglian School of illumination, which Sydney Cockerell was the first to define and study. Its acquisition is a tribute to his life-long passion for medieval manuscripts as a scholar and collector, and to the generosity of the Friends of the Fitzwilliam Museum whom he founded a century ago.