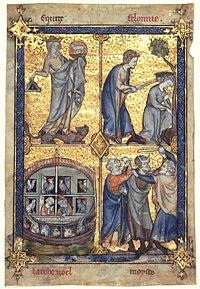 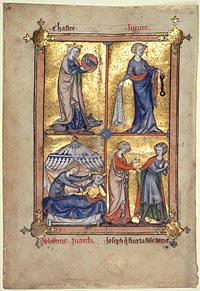 Compiled in 1279 for King Philippe III of France by the Dominican royal confessor Frère Laurent, La Somme le roi was a princely manual preoccupied with the fundamentals of Christian belief and moral edification. These miniatures belonged to a copy of La Somme le roi illuminated by the most celebrated artist in late thirteenth-century Paris, Master Honoré. The virtue of Equity is personified above its Old Testament analogue, Noah’s Ark, while the corresponding vice, Felony, is exemplified by Cain murdering Abel and by men contending with sticks, separated by Moses. Crowned Chastity holds a bird (purity) and tramples on a hog (lust); the biblical example is Judith who triumphed over Holofernes. Uncrowned Luxury holds a manacle and a towel, and spits blood. Below, Joseph escapes the advances of Potiphar’s lustful wife.

The top miniature (MS 192) was donated in 1892 by Samuel Sandars, a benefactor of the Fitzwilliam, Trinity College and the University Library. M.R. James published it in his 1895 catalogue of the Museum’s manuscripts as part of a Psalter. In 1906 Cockerell identified it as the work of Master Honoré and associated it with La Somme le roi. He hoped that the whole manuscript might be re-discovered one day. When another leaf from it appeared on the market in July 1934, he could not resist and bought it from the Friends’ Fund (MS 368). Four years later the rest of the volume resurfaced and was brought to Eric Millar, Cockerell’s friend at the British Museum, where it is now Add. MS 54180. ‘The study and collecting of medieval manuscripts has its thrills,’ wrote Millar, ‘but I do not personally expect to feel a greater one.’